A Ring for Roza

From the collection of the Jewish Historical Museum, Amsterdam 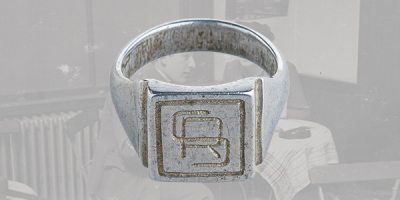 After their hiding place was betrayed, Roza and Siem Vos were deported via Westerbork to the Auschwitz Extermination Camp in Poland on 3 March 1944. They were immediately separated from each other.

Siem ended up in the men’s camp and Roza in the women’s camp. Contact with each other was basically impossible. Despite the appalling conditions Siem managed to get another prisoner to make him a ring with the initials R and S from a piece of old scrap metal. In a roundabout way, the ring was secretly delivered to Roza on her birthday: ‘Now, more than ever, I am bound to you’ was written in the poem that accompanied the ring.

In January 1945, the Germans evacuated Auschwitz because of the approaching Russian army. The weakened prisoners were forced to leave, usually on foot through the bitter cold. Many people succumbed during these death marches, including Siem. Roza survived by throwing herself into a ditch. She cherished this ring her entire life. In loving memory of Siem Vos, she gave it as a gift to Amsterdam’s Jewish Historical Museum in 2011.