From the collection of Museon (Museum of Science and Culture), The Hague 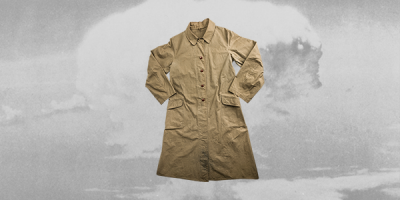 A flash and a deafening rumble. On 9 August 1945, the American Air Force exploded an atomic bomb 500 metres above Nagasaki. The Japanese city was wiped away, 39,000 people died and 25,000 were wounded.

Three days earlier, the Americans had also dropped an A-bomb on Hiroshima, but Japan still refused to surrender. A Dutch prisoner of war, J. van Houten, who had been deployed to work in a shipyard near Nagasaki owned by Mitsubishi, fled with his fellow prisoners to the hills surrounding the burning city. There was no time to grab anything. Van Houten was not wearing a shirt and it got very cold that evening. To his surprise, out of the blue, he heard a young Japanese soldier ask ‘Tsumetai ka?’, which means more or less: ‘Are you cold?’ When he responded yes, the soldier gave him this raincoat.

After a second atomic bomb was dropped on Nagasaki, Japan surrendered on 15 August 1945 and the Second World War came to an end.