From the collection of the Dutch National Military Museum, Soesterberg 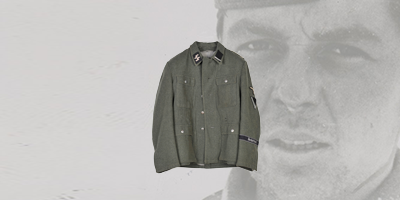 The Dutch volunteers who fought with the Germans were initially two apart groups: those who served with the Waffen-SS and those who registered for the Dutch Vrijwilligerslegion (Volunteer Legion).

It became possible at the end of May 1940 for somebody Dutch to join the Waffen-SS. About 1,400 men, primarily those who had enlisted with the SS, followed a rigorous training in Munich. When the German army invaded the Soviet Union in June 1941, the Germans launched a propaganda campaign to recruit a large number of volunteers from different European countries to take part in the ‘crusade against Bolshevism’. The Volunteer Legion was established in the Netherlands for this purpose. More than 20,000 men signed up. They expected to serve in a more or less Dutch unit, under Dutch command and to fight in a Dutch uniform. But reality proved otherwise. The volunteers were assigned to a unit that was actually part of the German Waffen-SS. The group was a diverse lot: thirty percent, at the very most, were members of the NSB. Many religious individuals, in their strive to protect the ‘Christian Netherlands’ against ‘godless Bolshevism’, also joined the legion. In addition, a large group of adventurers found the idea of volunteering appealing. More than 7,000 Dutchmen met their deaths during the war wearing German uniforms.